Behind the Film: Black is King

If you are reading this then we assume you have already watched Beyoncé’s film Black Is King. If you haven’t seen it, then stop where you are and go watch it. 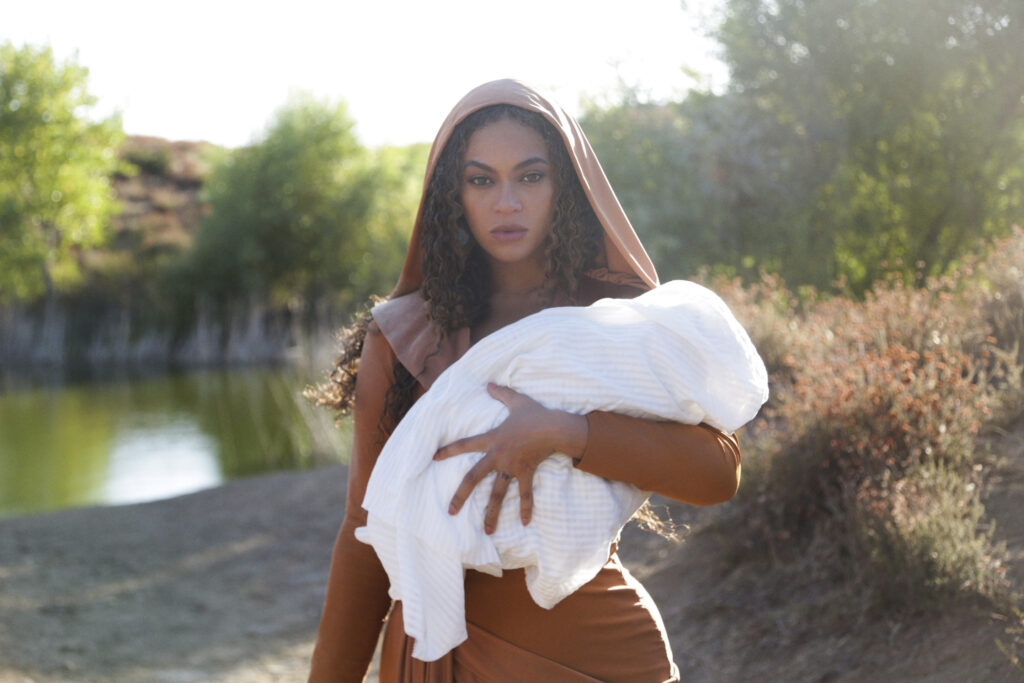 Well in case you have been living under a rock, Black Is King is the highly anticipated and absolutely stunning visual album that Beyoncé debuted on Disney+. The visual album features Jay Z, Blue Ivy, Kelly Rowland, and a number of other star cameos. It was written, directed, and executive produced by Beyoncé herself. The film is 90 minutes long. The film shows stylish music videos of songs from The Lion King: The Gift album and goes through Simba’s journey (based on the recent Lion King remake, but with humans instead of animals). In order to fully understand this film, you must keep in mind that the film has several meanings. Black Is King excels as a celebration of Blackness in its many forms: Black women, Black men, Black children, Black motherhood, Black fatherhood, Black pasts, Black presents, and Black futures.

Now, for those of you who did watch it let’s really dig into this wonderful masterpiece. I am going to break down the film Black Is King the best way I can. Follow along as I break down each scene and how it reimaged The Lion King and celebrating black culture. This is how Black Is King reimagines The Lion King. The film starts off with a male stating ” I feel like I’m not a king yet like I got potential for it but I’m not there yet. I know I got the capabilities but sometimes I don’t know how to navigate”. According to Disney+, Black Is King “reimagines the lessons of The Lion King for today’s young kings and queens in search of their own crowns.” Beyoncé starts out in an all-white dress carrying a baby (Simba/ young black king) while singing Bigger. During the opening scene, the young king begins to grow, and she marks his face just as Rafiki did in The Lion King. It is a ritual that marks the young as a prince. 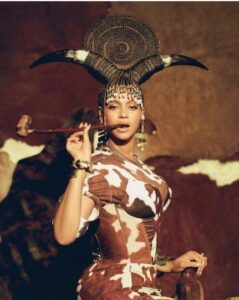 Bigger” takes its themes from the introduction by James Earl Jones. He speaks as The King of the Pride Lands, reflecting on the universal connection found within the circle of life. Beyoncé follows the intro track with a heartfelt message encouraging the listener to see themselves as a key piece of a larger whole.

The next scene transitions into the young king (Simba) speaking with his father (Mufasa). In the background ‘The Stars (Mufasa Interlude) is playing. Mufasa tells Simba that the stars will always guide him. This ties back into the beginning where the guy says he doesn’t know how to navigate. This was the perfect segway for the next song, Find Your Way Back. Are you still reading? (I sound like Netflix, lol just checking). Moving along in the film the young boy arrives at a place that represents Scar’s den. The Scar interlude plays in the background. Beyoncé can be heard saying “lead or be lead astray”. Upon entering the building there is a man with a snake around his neck (portraying Scar). The man asks the young boy “who are you” (this symbolizes finding yourself and your way back).

This scene transitions into Don’t Jealous Me. This song was a perfect match for obvious reasons, right? Scar was very jealous of Mufasa and Simba. As the young king continues on his journey he is met by a large group of men on motorcycles. Playing in the background you hear the voices of Nala and Simba talking about danger.

Black Is King excels as a celebration of Blackness in its many forms.

In this scene, the young king’s dad was run over by motorcycles (portraying the death of Mufasa). “No true king ever dies” Beyoncé can be heard saying. The next scene opens with an all-white funeral. In African culture, white is the color chosen for funerals.

As the film continues to navigate, the film goes into Mood 4 Eva, which is supposed to represent Hakuna Matata which means “no worries”. Do you get it yet? A thorough break down of this film does not do it much justice. You must go witness everything for yourself. Now that we have made the Lion King references known let’s talk about all the cultural knowledge shown.

Body painting is a colorful art used by various African cultures to celebrate, protect, and mourn. Specific colors are used to indicate certain periods in a person’s life such as puberty, courting, and marriage.

The “adumu” (“jumping dance”) is a Maasai warrior rite of passage to welcome young men to the next stage of their lives. This was shown as the young King grew up.

In Africa, red ochre is used for protection from the sun and a barrier.

In East Africa, women carry loads up to 70 % of their body weight balanced on top of their heads. They will carry food, water, supplies, and more.

African masks are used to represent the spirit of ancestors or to control the good and evil forces in the community.

During her video for Already, Beyoncé can be seen with cow horns. Uneducated people will call it devil worshipping. Good thing I am here to educate you on the meaning of the horns. Hathor is an ancient Egyptian goddess, considered the primeval goddess from whom all others were derived. She is usually depicted as a woman with the head of a cow, ears of a cow, or simply in cow form.

Hathor is closely associated with the primeval divine cow Mehet-Weret, a sky goddess whose name means “Great Flood” and who was thought to bring the inundation of the Nile River which fertilized the land. Nile is also a song on The Gift featuring Kendrick Lamar. 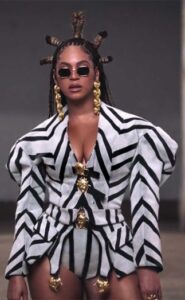 The filming was international including New York, Los Angeles, South Africa, West Africa, London, and Belgium and included a ton of international talent as well. Beyoncé spoke about how Black Is King has been a “labor of love.” “It was originally filmed as a companion piece to ‘The Lion King: The Gift’ soundtrack and meant to celebrate the breadth and beauty of Black ancestry. I could never have imagined that a year later, all the hard work that went into this production would serve a greater purpose,” she went on. “The events of 2020 have made the film’s vision and message even more relevant, as people across the world embark on a historic journey,” she continued. “I believe that when Black people tell our own stories, we can shift the axis of the world and tell our REAL history of generational wealth and richness of soul that are not told in our history books.”

There was way too much to cover for one article. The best way to experience this film is to watch it yourself. The film is available only on Disney +. So, if you didn’t stay up until 3 a.m. EST to watch it the second it debuted, definitely go and take a look as soon as you can.